Today's book is Anna Sewell's Black Beauty, the autobiography of a horse, published in 1877. My treasured antique copy of this landmark work on the plight of horses in 19th century England was given to me by my father, who had been given it in the 1920s. This exquisite edition is gilt edged and illustrated with colour plates. 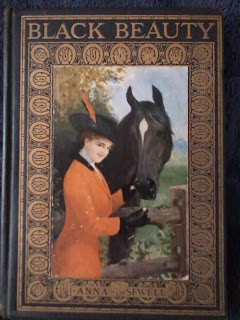 The story is told in the first person by a carriage horse, the titular Black Beauty, a literary device that might seem twee to modern readers. It is, in fact, wonderfully compelling. Beauty begins life with a good owner; through the vagaries of fate, he passes from hand to hand and endures various misfortunes. Beauty's account of the suffering of some of his stablemates is heart rending. Fortunately for the millions of animal lovers who have read the book, Black Beauty ends his days in a kind home. Anna Sewell wrote only this one book and died mere months after its publication. She could not have imagined the influence her words would come to exert and how greatly she would contribute to the betterment of horses' lives. 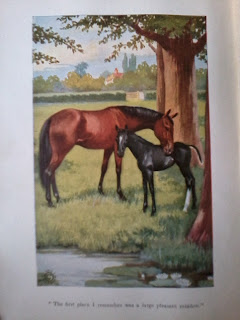 "The first place I remember was a large pleasant meadow." 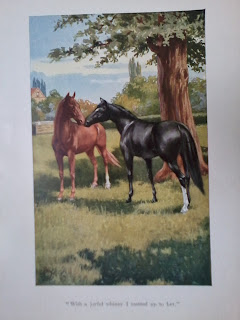 "With a joyful whinny I trotted up to her."
(Colour plates by John M. Burke)

One person greatly influenced by Black Beauty was Cleveland Amory (1917-1998). The founder of the Fund for Animals (www.fundforanimals.org) and the author of a number of books on animals, Amory was an outspoken advocate for the right of animals to be treated kindly. He didn't simply preach, he practiced, orchestrating some spectacular rescue operations. Ranch of Dreams (1997, ISBN O-670-87762-X) recounts the creation of his animal sanctuary in Texas. In the book's opening chapter, Amory relates his connection to Black Beauty, a copy of which was given to him when he was a boy by his maiden Aunt Lu, a rescuer of cats and dogs known as the Stray Lady. (As a maiden aunt and cat lady myself, I am charmed to think of this woman's influence; would that my nephews were similarly in my thrall. But I digress.) Not only did Aunt Lu give Amory a life changing copy of Black Beauty, she told him that his great-uncle George Thorndike Angell had been so moved by the book that he had brought about the publication of an American edition in 1890 and had disseminated its message far and wide. "By the end of his life, writes Amory, [Angell] had given away more than a million copies of the book to libraries, schools, stables and the public." My own copy is a 1911 American edition. In 1979, when Cleveland Amory was finally able to found a sanctuary for mistreated animals, he named it Black Beauty Ranch. In memory of the book that started it all, he inscribed these words, taken from the last paragraph of Black Beauty, on a sign at the entrance to the sanctuary:

I have nothing to fear, and here my story ends.
My troubles are all over, and I am at home.

Its website (www.blackbeautyranch.org) explains: "The ranch is not a zoo and is not open for regular public visitation. Amory's vision was that it would be 'a place where animals are looked after, not at'." The sanctuary houses a large number of domestic and exotic animals. Anna Sewell would approve, and Aunt Lu would be justifiably proud. 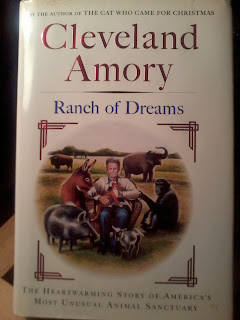 Other nonfiction books by Cleveland Amory:

BOOKS, BEASTS and BEYOND